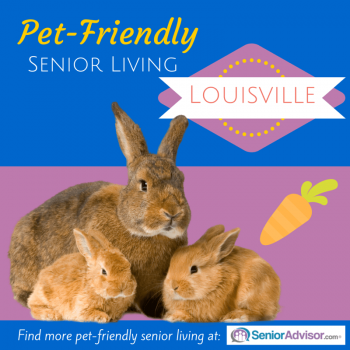 The Horse Capital of the World is also a great place to live with smaller animals. Louisville offers lots of top-quality pet-friendly housing, a huge network of parks and off-leash dog areas, and active groups of animal lovers who get together for volunteer work, social time, and special events.

Derby City is home to an unusually high number of award-winning senior communities that welcome pets. Seven of them have earned the SeniorAdvisor.com Best of Assisted Living 2015 award, as determined by resident and family member reviews. They are:

For seniors seeking independent living with pets, The Forum at Brookside is another SeniorAdvisor.com award winner. The Forum’s 40-acre campus gives residents and their companion animals plenty of shady green space for outdoor recreation. And if you need to travel without your pet, the Kentucky Humane Society runs two pet resorts in Louisville that offer boarding, playtime, and grooming services.

Lots of parks for people and dogs

Louisville has a national reputation for its large and well-developed public park system, so it’s no surprise that there are lots of dog parks as well. The non-profit Louisville Dog Run Association operates 8 off-leash play areas around the city. The largest is the Barklands of Floyds Fork in Beckley Creek Park, a multi-acre free-roam zone with fenced areas for small and large dogs, a gravel garden filled with fire hydrants, and other amenities. Admission to LDRA-run parks is open to permit holders. Permits are available at local Feed Supply Stores each October and are good for one year. A permit for one dog costs $30, with discounts for additional dogs.

Other dog parks in the greater Louisville area include the new Highland Dog Park in Jeffersonville, which has shade, fenced play areas, and water fountains for people and dogs. A yearly permit costs $50. In Shelby County, Red Orchard park is the site for Michael Kay’s Bark Park, a 5-acre off-leash area that includes 2 acres set aside just for smaller dogs. Annual permits start at $35 per year.

Clubs and shows for dog, cat, and rabbit lovers

For dog owners who want social time and some friendly competition, the Louisville Kennel Club hosts shows and matches at various times of the year, such as the 4-day Kentuckiana Cluster of Dog Shows. The LKC also organizes training classes, helps raise money to support law enforcement K9 programs, and collects donations for the local food pantry.

Meanwhile, the Kentuckiana Cat Club has been hosting championship shows for more than half a century. These annual fall events bring together household pets, purebred competitors, and ardent cat fans for two days of judging, shopping, and social time.

The Kentucky State Rabbit Breeders Association offers youth education, pet care information, and the occasional big event. Its 2013 Kentucky Cup Rabbit Show drew more than 3,000 fuzzy entries from around the world for 2 days of posing and hopping. KSRBA also participates in the Kentucky State Fair in Louisville each August, where fairgoers can also see horses, herding dogs, goats, and other show animals.

With so many animal lovers and so much room to roam, Louisville is a winning destination for retirees with pets.

How Much Does Louisville Assisted Living Cost?

How Much Do Louisville Nursing Homes Cost?

Find assisted living in Louisville near you.

Smarter Than You Think: How Using Technology Makes Your Brain “Younger”
Sleep Apnea and Dementia