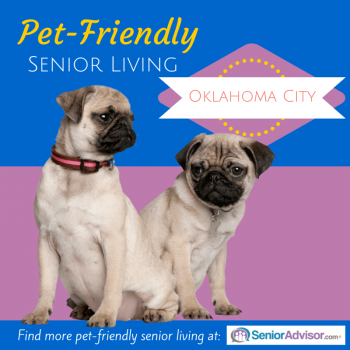 Life with pets is more than OK for seniors in Oklahoma City. Retirees here can find award-winning communities that welcome pets, more than half a dozen dog parks in the metro area, a summer dog show series that draws entries from around the world, and a large number of canine agility and obedience clubs. Add to all of that a growing citywide system of walking trails and you’ve got a city that ranks 3rd in the nation among real-estate site Movoto’s Best Cities for Pet Lovers.

Oklahoma City is home to more than 15 assisted living and independent living communities that open their doors to dogs and cats as well as people. Four of those pet-friendly places are also winners of SeniorAdvisor.com 2015 Best of Senior Living award as determined by resident and family reviews.

From a pet-positive home base, it’s easy to access all kinds of pet-centric activities and events around town. Click the image below to explore Oklahoma City’s retirement options:

Dog parks all around Oklahoma City

Oklahoma City may not have the most dog parks, but it does have some of the most cleverly named off-leash areas. PAW Park has been ranked among the top 10 US dog parks by DogFancy magazine. Visitors will find a 2-acre fenced space in Lake Hefner Park with a pond for summer swimming. Wiggly Field, in the suburb of Del City, gives dogs a 3-acre section of Ray Trent park for off-leash romps. Midtown Mutts is a small, privately owned park in downtown that’s free to the public.

The most popular dog park in the Oklahoma City area is the suburban 4-acre Edmond Dog Park that’s got plenty of benches, lots of shade, and a gated lake for canine swimming. And the most delightfully unexpected is the dog park at Myriad Botanical Gardens. Rather than try to keep pups out of the garden, Myriad welcomes leashed dogs along its landscaped trails and gives them their own off-leash area, too.

The Oklahoma City metro area has lots of clubs for dog and cat aficionados. Feline friends can check out the Oklahoma City Cat Club and Thunderkatz, both of which host cat shows. The OKC Kennel Club, meanwhile, partners with other clubs to host the annual Summer Classic Dog Shows every June.

For year-round exercise and social time, there are several clubs and schools in the metro area. The OKPaws K9 sports club has members who work on rally, flyball, agility, and disc games, while the Red Dirt club focuses exclusively on agility. City Dogs Agility also works on a single sport; some of its member dogs have won national and international accolades. Dogs new to sports—or who just need some time on the treadmill—can take classes and work out at Canine Sports Academy in Norman.

With so many options for pet lovers and their animal friends, it’s easy to see why Oklahoma City is a top dog town.

How Much Does Oklahoma City Assisted Living Cost?

How Much Do Oklahoma City Nursing Homes Cost?

Find assisted living in Oklahoma City near you.