Smarter Than You Think: How Using Technology Makes Your Brain “Younger” 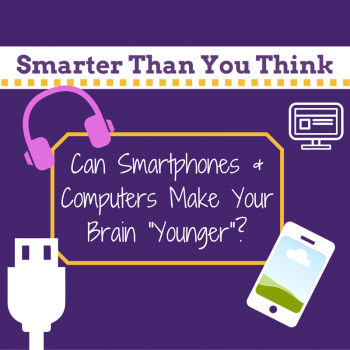 Smartphones and computers have enabled a lot of amazing things: e-mail, a nearly endless stream of funny cat videos, and navigation when we’re driving around town. Now some researchers think tech tools may also slow down the rate of aging in older adults’ brains. A study by Austrian researchers from the Wittgenstein Center and the University of Vienna, published in the psychology-research journal Intelligence, found that today’s seniors who regularly use technology have the brain function of someone up to 8 years younger, compared with seniors studied ten years ago.

It’s widely documented that seniors (and everyone else) have been getting smarter for almost a century, thanks to better nutrition, disease prevention, and access to education. But when the researchers compared cognitive-function test results from a group of adults who were 50 or older when they were tested in 2006 to a different group of senior adults tested in 2012, they saw some significant differences in performance. The 2012 group scored an average of 4 to 8 years “younger” in terms of brain function than the 2006 group, which the researchers attribute in part to the stimulating and educational effects of using computers and mobile devices.

What should you do with this information? There are subscription-based programs designed to help adults retain and strengthen memory and other cognitive skills. These “brain games,” like the ones offered by Lumosity and Rosetta Stone, are based on neuroscience and allow users to track their progress in multiple games. There are also plenty of other free or inexpensive ways to stay socially connected and keep learning with tech. Here are a few favorites:

Texting used to be fussy—too much typing on tiny keyboards—and costly, back when carriers charged by the message. Now, smartphone users can share photos and videos in text messages, carriers usually throw in unlimited messaging as part of a wireless deal, and voice-to-type lets you can dictate texts instead of typing them.

Skype and FaceTime video chat apps are loved by far-flung friends, parents who travel frequently for work, and grandparents who want to talk with the grandkids and actually see their faces. My favorite use of FaceTime: A relative uses her tablet to video chat with her overseas grandson during holiday gatherings, and she takes the tablet around the house so everyone can say hello to him.

Duolingo, a free language-learning app, offers no-pressure instruction in many European languages. Its easy-to-read interface and clear teaching methods can help you pick up some Spanish for your next vacation, revive your high-school French, or travel back in time to when Oma und Opa spoke German to you at home.

Minecraft is one of the most popular computer games in the world, with more than 100 million registered players and somewhere around a million players online at any given time. That number includes a fair number of older adults who enjoy building things, joining online communities, raising virtual farm animals, and even designing mixed drinks inspired by characters in the game (check out the video below). The game isn’t free, but there is a free trial. You can find getting-started advice in PC Magazine and from the nearest teen or tween.

There’s no consensus on exactly how technology may be making us smarter and mentally younger, so your best bet is to use technology in ways that connect you to the people you care about and help you learn more about the things you find interesting.