SeniorAdvisor.com Blog > Blog for Families > What Self-Driving Cars Will Mean for Seniors

What Self-Driving Cars Will Mean for Seniors 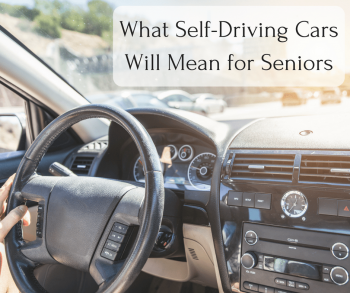 There’s a lot of exciting technology on the horizon poised to change the lives of seniors, but one of the innovations getting the most hype is the self-driving car.

Just like it sounds, a self-driving car (sometimes called driverless cars or autonomous cars) is a car that doesn’t need a person at the wheel to get from place A to place B. The car itself is programmed to recognize obstacles in its path and understand basic driving laws so that, if anything, it’s likely to be safer to ride in than a car with a person who’s prone to fatigue, bad days, or distracted moments behind the wheel.

That’s the idea anyway, but the technology isn’t quite there yet.

The Status of Self-Driving Cars

Self-driving cars have made it onto the roads in a few key cities, mostly to test out the technology and with someone still behind the wheel. Over time as companies do more testing and the cars get smarter, the person behind the wheel has less and less to do.

That suggests the cars aren’t too far off from going onto the market for general consumers. But the bigger question isn’t when individuals (and companies like Uber and Lyft) will start to be able to buy and use them; it’s when they’ll reach the point of largely taking over our roadways.

Some experts following the technology foresee a future within a couple of decades where self-driving cars that can talk to each other and recognize traffic trends in real-time in order to make decisions that decrease traffic and make transportation safer will largely replace cars with humans at the helm.

If the self-driving cars that take over our roadways are largely owned by rideshare companies like Uber and Lyft, there may well be no reason for individual car ownership and the stresses that often come with it. Parking problems in overpopulated cities will be alleviated since no car ever needs to stay in one place. And people who struggle now in our car-driven society due to things like eyesight issues won’t have to worry anymore about how to get from one place to another. Which brings us to our next point.

Why Self-Driving Cars Matter to Seniors

Right now, a moment many seniors dread is the day when their kids tell them it’s time to stop driving. Aging often brings with it eyesight problems, greater difficulty making fast decisions, and a tendency to get lost more often. Once factors like these come into play to the degree where it’s no longer safe for a senior to stay on the road, the keys get taken away.

For many seniors today that feels like a huge loss of independence. Everyday errands like going to the grocery store or post office suddenly feel out of reach. Maintaining hobbies and social connections becomes far more challenging. Having to ask for help every time they want to do something essential like go to the doctor or fun like heading to the movies quickly weighs on many seniors.

While there are more local transportation options for seniors today than there were for past generations, the day a senior stops being able to drive still often feels like a big step toward losing their independence.

Self-driving cars will change all of that. If nobody has to drive to get from place to place, then seniors won’t be any different than anybody else. Getting to the grocery store, their book group, or the doctor’s office will all be just as easy for them as it is for everybody – no matter their eyesight or any other symptoms of aging.

That extra access to independence and convenience may well further the current trend of more seniors aging in place and staying active far into their retirement years. For seniors (as well as for many other people), self-driving cars will be a groundbreaking development that puts more options for living how they want easily within reach.

How to Keep Your Brain Healthy? Get a Little Uncomfortable
Dementia vs Alzheimer’s: What’s the Difference?