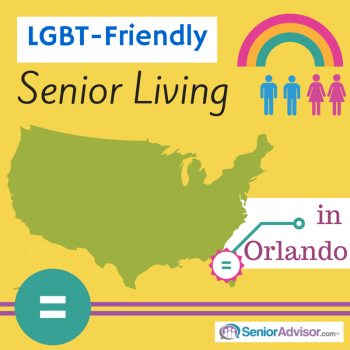 When it comes to retirement living, Orlando has its own special magic. America’s “theme park capital” is home to some of the nation’s most popular tourist destinations, it has great weather, and its low cost of living—especially housing—makes it a perennial favorite on “Best Places to Retire” lists. Orlando is famously LGBT-friendly, ranking among “The Advocate’s” 2014 Gayest Cities in America. And while Orlando has protected domestic partnerships since 2012, Florida is now among the states where same-sex marriage is legal, giving retired LGBT couples access to the estate- and care-planning rights they need.

The Center of it all

The Center, officially named the Gay, Lesbian, Bisexual, Transgender Community Center of Central Florida, is the state’s oldest active LGBTQ group. The Center serves the greater Orlando area with support and social groups, HIV screenings, popular community fundraising events, and a computer lab where members can get tech savvy and search for jobs.

Among the regular events at the Center are twice-weekly Senior Social lunchtime gatherings, weekly Out and About events, political meetings, trans and coming out support groups, and writer’s groups.  The Center and selected Orlando-area eateries take part in the annual Dining Out for Life fundraising day, giving locals a chance to sample local cuisine while raising money for the Center and AIDS Services of Pinella. The Black & White Gala each fall is considered the “LGBT social event of the season,” where guests enjoy dinner and a show at the Orlando Museum of Art.

A “gayborhood” that encompasses the whole city

In its LGBT tour guide, Visit Orlando makes the point that there’s no single “gay area” in town because LGBT residents live all over town, “creating a true sense of diversity.” That may be in part because Orlando’s tourist businesses have welcomed and catered to LGBT guests for years. That’s especially true now that one of the country’s most popular states for destination weddings and honeymoons offers the same options for same-sex couples.

Orlando’s most famous destination, Disney World, is the unofficial center of one of the world’s most popular LGBT events, the annual Gay Days celebration each June. A combination of Pride Week festivities, theme-park visits, and a large LGBT business expo, Gay Days draws more than 170,000 visitors for a long weekend of fun and networking.

Watermark, the region’s print and online LGBT news source, helps Orlandoans keep up with all that’s happening in the city, Central Florida, and beyond. Watermark covers the local arts scene, senior issues, LGBT-owned businesses, and nonprofit events along with legal and advocacy issues, sports, and health news.

Retirees who relocate to the Orlando area will find that the cost of housing is about 30% below the national average, with that low number primarily due to home prices rather than rental rates. Greater Orlando is home to many highly rated independent living and assisted living communities, including several Best of 2015 winners as rated by SeniorAdvisor.com families.

With a thriving LGBT community, a relatively low cost of living, and a seemingly endless list of leisure options, Orlando is an appealing retirement option for everyone.

How Much Does Orlando Assisted Living Cost?

How Much Do Orlando Nursing Homes Cost?

Find assisted living in Orlando near you.