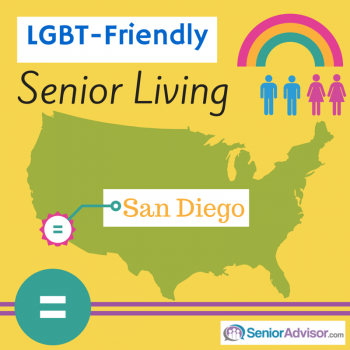 San Diego is an appealing retirement destination for a lot of reasons: great weather, expansive beaches, and centuries’ worth of local history and culture. And as the 2nd-largest city in what’s arguably the most gay-friendly state in the Union, San Diego is an especially welcoming place for LGBT seniors. Whether you’re into film and music festivals, window-shopping and dining in the city’s pedestrian-friendly gay neighborhoods, or meeting friends to play canasta, there’s always something to do in San Diego.

Hillcrest, with its iconic Pride flag flying over University Avenue, is the best-established LGBT neighborhood in San Diego. Filled with shops, restaurants, and quirky boutiques, Hillcrest is also home to some of the city’s highest-profile LGBT institutions, such as the Hillcrest Cinema and the San Diego LGBT Community Center, referred to by nearly everyone simply as “The Center.” The area offers plenty of options for spending time with friends, shopping, and connecting with the local LGBT community.

Other nearby neighborhoods that are popular with gay, lesbian, bisexual, and transgender San Diegans include University Heights and North Park. All three areas are just north of the city’s centerpiece, Balboa Park. One of the closest senior living communities is St. Paul’s in Banker’s Hill, to the south of Hillcrest, which offers continuity of care and non-denominational support for seniors. Many other senior communities are within a 15-minute freeway drive of Hillcrest and Balboa Park as well.

As one of the largest and oldest LGBT community centers in the US, The Center in San Diego has spent nearly 4 decades developing its services, including specialized programs for seniors, along with social groups, annual community events, and civil rights projects.

Senior activities at The Center include creative writing, yoga, tai chi, card games, and support groups for caregivers and cancer patients. The Center also offers lots of ways to get involved through volunteerism, for seniors who have a skill or interest to share with others. In addition to social events and volunteer opportunities, The Center also maintains contacts with other health and legal resource groups in San Diego that specialize in senior issues.

San Diego’s LGBT social calendar is full year-round with fundraisers, film screenings, and more. Major annual events include the San Diego Pride music festival, parade, and other festivities in and near Balboa Park each July. FilmOut San Diego sponsors a film festival every May and schedules showings of new films and revivals of old favorites at the Hillcrest Cinema throughout the year. And The Center hosts a number of special happenings, such as the Pachanga de Frida celebration every June in honor of artist Frida Kahlo, AIDS Walk San Diego in September, and Dining Out for Life each April to raise money for HIV/AIDS research and services.

With so much going on, you can stay busy all year long or take your retirement at a more leisurely pace. Either way, San Diego’s calendar of events, thriving LGBT community, and gorgeous natural setting make it a top spot for LGBT-friendly senior living.

How Much Does San Diego Assisted Living Cost?

How Much Do San Diego Nursing Homes Cost?

Read reviews by residents and their families for assisted living facilities in San Diego on SeniorAdvisor.com.