When I was a kid, my grandmother drove her VW Beetle all over the country to visit family and friends. I thought her independence was cool and I didn’t understand why her road trips stressed my mom. But wandering, falling, and other mishaps are serious risks for older adults when they’re out and about. Now, a group of University of Michigan students has developed a way to help seniors stay safer while getting out of the house.

Their tool, Companion, is a smartphone app that lets users share their location and destination with others before they walk, drive, or take public transportation. The selected companions can monitor their progress and get instant text alerts if there’s a problem along the way. The app can also connect the user to 911 dispatch in case of emergency and flag areas with suspicious activity for law enforcement when the user pushes the “I feel nervous” button. Originally designed to help college students walk home safely at night from study sessions, work, and parties, Companion has earned worldwide media attention and is now used in 180 countries by people of all ages.

Companion is free to download, and its simple interface makes setting up a trip and choosing companions easy. Just choose your destination, start your trip, choose companions, and you’re ready to go. To retain user privacy, you’ll need to select companions anew for each trip. Because the app connects to your phone’s contacts list, you don’t need to remember anyone’s cell phone number, and because information is sent via text message, they don’t have to have the app on their phone (although to watch your real-time progress on a map, they’ll need to download it.) 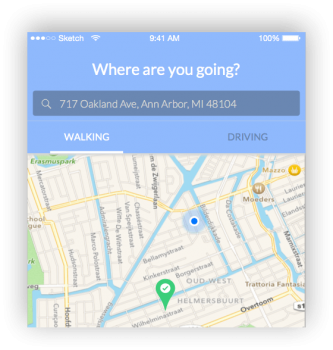 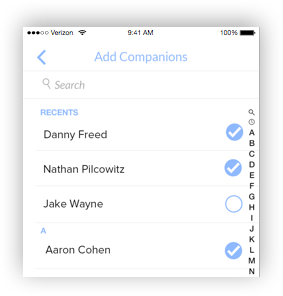 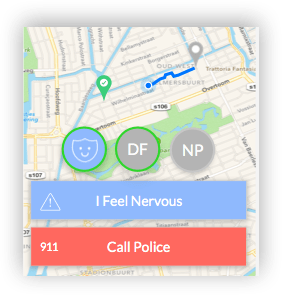 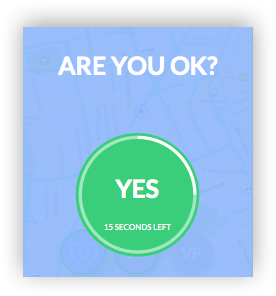 I tested the app on my Android phone during a short car trip and on a walk to a park. For both trips, the app sent text messages to my teenage son (who relished the chance to keep tabs on me for a change) letting him know when my trip began and when it ended.

On the walk I tested some of the app’s safety features. Yanking the headphones out of the phone, breaking into a jog and heading off in a direction the app didn’t expect all resulted in a buzz and a large button screen asking if I was OK. I had 15 seconds to push the button, and when I did, that was the end of it.

Once, though, I let the 15 seconds run out. My son received a text and a link to a map to follow my progress. I was shown another screen with a smaller “I’m okay” button (which I pressed) and an emergency call button. I wasn’t brave enough to try dropping my phone, but Companion’s developers say that will result in an inquiry and an alert, too, which can help with fall detection.

My son said the map link Companion sent to him opened but then crashed almost immediately, the only glitch we experienced while using the app to track my trips. During my walk, glare made the screen hard to read. That’s a general problem with screens and sun, not a problem with the app, but it did make setting destinations and responding to “Are you OK?” inquiries hard to do, so seniors with low vision or problems seeing in bright conditions might have trouble making use of the app outdoors.

Companion’s designers say their app can help users feel more secure but remind them to always be aware of their surroundings and use common sense on safety.

The Companion app is free and so is its messaging service. Users and their companions may be charged for text messages generated by the app, depending on their mobile service plan.

Active seniors who want their loved ones to know where they are while they’re walking, driving, or taking the bus or train to a destination—and adult children who worry about the seniors they love.

Have you used the Companion app? Leave a review!