Our parents always asked that we listen, but what happens when they refuse to listen to us? Some adult children are finding that their parents don’t always know best when it comes to their driving, housing, medication and more. 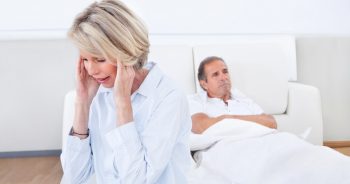 Learn more about what to do when your aging parents aren’t listening to you.

Dad or Mom Won’t Take Your Advice: Now What?

Research out of Penn State University, the New Jersey Institute for Successful Aging and the Rowan University School of Osteopathic Medicine, found that 77% of adult children believe their parents are stubborn about taking their advice or getting help with daily problems.

Mary Heitger-Marek, a 46-year-old program analyst from Annapolis, Maryland, could write the book on parental stubbornness. Her parents were living in a condo in Florida with ongoing health problems and steep stairs. She begged them to move near her to a housing community with support. Instead, they bought a home in Florida with a pool and yard. They also acquired a pet. Several falls (some from walking their new dog) and multiple surgeries ensued. They refused to hire help for either themselves or their house.

Instead, they moved into an independent living community near Heitger-Marek, again refusing a professional caregiver. Then their situation changed rapidly. Her dad passed suddenly and since then, her mother has been hospitalized four times. Now she’s in rehab but plans to move in with her daughter, Heitger-Marek. She is still vowing not to have outside help.

“My parents’ life decisions have greatly impacted me and I am very resentful,” says Heitger-Marek. “I love my mother, but I am at my wit’s end. I can’t even begin to tell you how many times my husband and I have suggested options to improve my parents’ quality of life and they have turned us down. I feel like we could open a senior care business because of all the programs, aid and other things we have looked into for them.

What to Do When Your Aging Parents Won’t Listen

We asked experts for their advice on what to do in situations like this — and unlike some parents, we did, in fact, listen.

You may want your mantra to be “It is what it is.” Said another way, “you can take a horse to water, but you can’t make them drink.” Suzanne Modigliani, a Boston-based geriatric care manager with a social work background, points out, “they are adults with the right to make decision — even poor ones.”

2. Blame it on the kids (that would be you) or the grandkids.

If Mom isn’t willing to change her behavior for herself, would she do it for a loved one? Robert Kane, M.D., author of “The Good Caregiver,” Director of the Center on Aging at the University of Minnesota and a professor in its School of Public Health, says his mother quit smoking after his sister argued the second-hand smoke was a risk to the grandchildren. Another approach is to say to your parent, “You don’t want me to worry, right? This (fill in the blank) will give me enormous peace of mind. Please do it for me!”

3. Decide how important the matter is.

Is it a safety issue or something that is just irritating but inconsequential? As the saying goes, pick your battles.

Roseann Vanella, 50, of Marlton, New Jersey, happens to be a family mediator. But even with her professional training, she has been unable to reason with her parents. Her father, 84, has dementia and her mother, 75, has a rare blood disorder. Still, her mother insisted on taking her husband to Sicily on vacation. Vanella told her, “I can’t stop you so at least get medical jet insurance.” She said she would. Soon after arriving in Italy, her mother’s disease kicked up, she needed a blood transfusion and to come home. She admitted she never purchased insurance. Vanella and her brother were on the next plane. “After that I said, ‘she’s never going to take him to Europe,’ but she did,” says Vanella. “I told her how bad it was for my dad since his dementia had progressed.” Again, Vanella had to go to Italy and bring them back. “The hardest part is knowing something could have been averted but wasn’t,” she notes. “My advice is not to hit your head against the wall too hard. There isn’t a lot we can do sometimes but stand by, watch closely and be able to jump in when needed.”

5. Find an outside outlet for your feelings.

If you’re angry or resentful that Dad’s not with the program, confide in, strategize with or vent to, a friend, geriatric care manager, geriatrician, online support group, sibling or therapist rather than your parents.

Is there a milestone they want to be around for, such as an anniversary, graduation or wedding? Then bring it up!

8. Try to understand the motivation behind their behavior.

Modigliani says to ask yourself: Are they acting this way to assert independence, or because they’re confused or depressed? What are they afraid of?

Caitlin Burm is an award-winning editor and writer who has written extensively about education, health and senior care, most recently at A Place for Mom and previously at Arizona State University and the City of Tempe, Arizona. She thrives on content strategy and storytelling and resides in Phoenix with her daughter and husband.