SeniorAdvisor.com Blog > Blog for Families > How to Dispute Medical Bills

How to Dispute Medical Bills 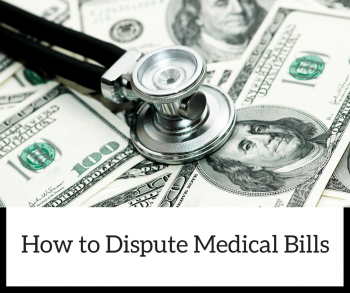 Everyone in the U.S. has had the experience at some point. You go to the doctor, they say you need some test or procedure, so you do what they say. Then a month or two later you’re hit with a massive, unexpected bill.

Maybe you thought it would be entirely covered by your insurance, or maybe you just figured it would be for a more manageable price. Whatever you thought, you’re now on the hook for hundreds or even thousands of dollars and you don’t even really understand what it’s for.

It’s frustrating, it’s infuriating, and it often leaves you feeling hopeless in the face of an obligation you simply can’t afford.

What not everyone knows is that a lot of those surprise mysterious medical bills aren’t accurate.

A NerdWallet report found that nearly half of the medical bills patients are saddled with include errors. Most people put up with those errors because they don’t know better. The system’s so complicated that we generally have no idea when we’re being charged the right amount or not. So even when paying those bills is a struggle and causes genuine hardship, people scrounge to make their payments.

A little bit of skepticism can potentially save you a lot of money though. The next time you receive a medical bill you’re not sure about, instead of blindly paying, do some research first to check that the amount is what you really owe. If it’s not, you can dispute the bill and bring your costs down.

Here’s how to go about it.

The first, simple step is one that most people skip. It’s easier to look at the total at the bottom (probably freak out a little bit) and just pay it than it is to really analyze what the bill’s saying. Simply by taking this one important step of starting to pay more attention, you make a big move toward reducing your risk of paying more than you have to.

If the original bill you received doesn’t provide any details, then ask for an itemized receipt that does. Then really look at what you’re being billed for. Google the billing codes to see what procedures, tests, and medications you’re being billed for and check your memory to see if they match what you remember experiencing in the hospital. You won’t necessarily recognize the names of all drugs or procedures, so you probably won’t be able to say for sure at this step if something is amiss, but it will start you down the right path.

Before you get to the point of disputing a medical bill, you can expect to spend some time on the phone with both your doctor’s office and your insurance company. It will take some time and, even if every representative you talk to is kind, will probably involve some moments of serious frustration. It’s a frustrating system even in the best of circumstances (and if you’re sick, it’s already not the best of circumstances).

To get through the process, prepare yourself to spend some real time on the phone asking questions. Know what you’re going to ask before each call and document every conversation you have. Take down the day, the name of the person you talked to, and the answers or suggestions they provided. That record will be helpful to you as you move forward.

You want to make sure the bill you get from the hospital or doctor’s office matches the information your insurance has. If the bill has something different or extra, then there’s a good chance there was an error made between the office billing the insurance company and billing you. Also check to see if you’ve been billed for anything that your insurance already paid.

This step will often help you identify the most common errors. But even if there’s not a clear discrepancy, you’re not done sleuthing yet. Errors can creep in during a number of different parts of the billing process.

Even if everything listed looks right to the best of your knowledge (and based on what the representatives at the insurance company and doctor’s office have said), if the price still seems disproportionate, then it’s worth checking to see what hospitals typically charge for the services you’ve been billed for.

Some insurance companies offer a pricing tool to give customers an idea of the averages for certain procedures. If yours doesn’t, you can try Guroo.com to see what’s normal or even just do some Googling to see what other people have said about their experience with the procedure online.

Once you have the information you need to feel confident that an error was made, file an official dispute. Make copies of any documents you have that support your claim and write a letter making your case to send to the doctor’s office.

If there’s part of the bill that’s not in dispute, go ahead and pay that. You want to make it clear to the office that you’re cooperative and reduce the risk of your bill going to collections. Stay in touch throughout the dispute process to check on the status of things.

If you’re not having much luck disputing the bill, then it might be worth passing the task over to a patient advocate. A patient advocate will have more experience navigating the medical billing process and will have a better idea of the right questions to ask and processes to follow to get faster results.

A few companies and organizations exist to help people fight their medical bills – either to get them reduced or remove erroneous charges. Remedy and the Medical Billing Associates of America are good place to start.

Nobody wants to deal with phone calls and red tape over medical bills when they’re healthy, much less when they’re sick. But with costs as high as they are, a willingness to pay attention and start asking questions when something doesn’t look right can potentially save you hundreds or thousands of dollars. Next time you get a mysterious surprise bill, don’t freak out about the cost. Start by doing a little research to see if it’s even legit.

Should You Hire a Patient Advocate?
SeniorAdvisor.com Best of 2017 Awards