Converting a Traditional Nursing Home to the 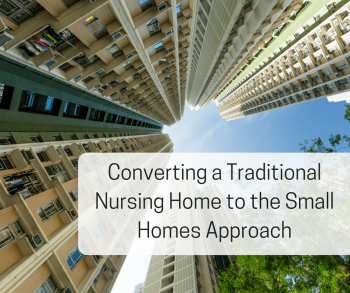 The Green House and Small Homes models of senior care have great outcomes in terms of patient satisfaction, family satisfaction, and reduction in employee turnover. But most senior care facilities don’t have the option of setting up separate, freestanding group homes in a residential neighborhood or on a campus. That doesn’t mean the small-homes approach is out of reach, according to St. John’s Home skilled services administrator Rebecca Priest.

Priest recently spoke to SeniorAdvisor.com about her facility’s big project, which is nearly finished converting an entire 455-resident senior-living tower in the middle of Rochester, New York, to the small-homes approach. Here are her best tips for nursing home and assisted living administrators who would like to convert a traditional nursing home to a Small Homes or Green House format.

Work with the real estate you have

“In an ideal world, we could move all our residents into houses,” Priest acknowledged. “But we’re in the middle of a city in a high-rise, so we decided to reconfigure each floor to have two penthouse-suite style apartments, each with room for 16 elders.”

Use existing funds to get started

Converting an apartment tower from the old-school layout of rooms on a hall with a nurses’ station takes cash, and for the vast majority of nursing homes the transition has to be done in stages. Priest recommended starting with existing maintenance and upgrade funds, if possible.

“You’re usually spending some money each year on upgrades anyway, so instead of updating the existing setup, maybe take a year’s worth of that money and use it to create a demonstration. Take a leap of faith, renovate one small space, and make it a showpiece for fundraising to get the rest of the project done.”

Besides pitching your idea and showing your model units to donors and the media, look for local groups that also advocate for better senior housing options. “Most regions have Culture Change Coalitions or groups like the Pioneer Network” that can offer support and guidance as your facility transitions to the Small Homes model. Local officials and state lawmakers can be another potential source of support.

Be patient with the process

Priest said that, in all, the transition at St. John’s from nursing-home layout to group apartments has taken six years. And it’s not only the layout and staffing roles that have to change. Residents who transition from the old model to the new have to adjust, too, Priest said.

For example, residents who had learned the habit of relying on the social director to come up with things to do now have to talk with one another and their direct-care staffers to set up activities and outings. Getting used to the new routine, she said, can take about 3 to 6 months for residents and staffers

Be proud of your work

Even if you convert just a portion of your facility to the Small Homes/Green House approach, you can justifiably pat yourself on the back. Priest and other eldercare administrators have found that residents’ satisfaction is higher and employee turnover is lower in these patient-centered settings. And as demand grows for alternatives to traditional senior housing, you’ll be in a better position to meet the needs of staffers, residents, and their families.

New Alzheimer’s Research: Could Gut Bacteria Play a Role?
6 Tips for Dealing with a Difficult Diagnosis