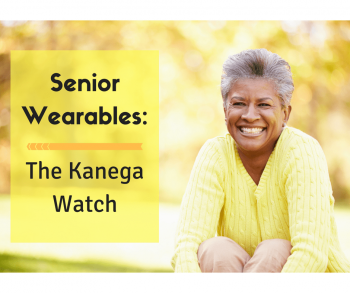 Wearable technology is one of the biggest consumer trends of the past few years and one that seniors, in particular, can really stand to benefit from.

Wearables are, quite simply, technology you can wear. Some of the better known versions of wearable technology are the fitness trackers like the FitBit and Misfit that help people track basic health metrics and challenge themselves to do better over time.

Senior wearables haven’t gotten quite as much play in news stories, but many have been developed that provide handy solutions to problems familiar to many seniors. From a wearable GPS that makes it easy for loved ones to find a senior with dementia that wanders off, to a wearable device for seniors with cardiac issues that keeps a constant monitor on the heart to give wearers an early warning before serious problems, senior wearables are quite literally saving lives.

Seniors now have yet one more wearable coming on to the market that’s been designed with them in mind.

A New Smartwatch for Seniors

The Kanega watch from UnaliWear is a smartwatch designed specifically to meet the needs of seniors. The company recognized a number of needs seniors have that a well-designed wearable could solve and went straight to potential consumers to raise funding to create it.

Many months and a successful Kickstarter campaign later, and the smartwatch for seniors is in development and on track to be released in early 2017. The founder of UnaliWear, Jean Anne Booth, is a serial entrepreneur with enough experience in the tech space to know that her idea for the Kanega watch could become a reality.

Enough seniors showed up to support that wearable’s development that the Kanega Watch seems poised to make a real mark in the senior wearable space.

The Kanega watch has been called a “wearable OnStar” by early testers because it offers quick, personal help at the moment you need it most. But you don’t have to be in your car to access it; you can wear it at all times.

The list of features the senior smartwatch provides is long:

The goal of the Kanega watch is to give seniors the means to continue living life independently, while making some of the tasks that are hard to keep up with easier and ensuring they stay safe every step of the way.

How to Get One

The Kanega watch isn’t available on the market just yet, but you can pre-order one or sign up to be a beta tester.