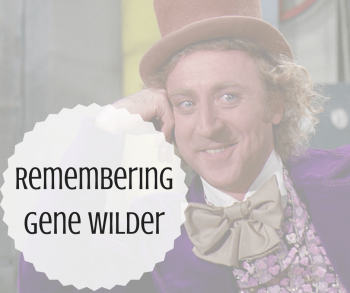 As you probably already heard, the world lost one of its greatest comedic performers this past month. Gene Wilder’s family announced on August 29 that he had passed away due to complications from Alzheimer’s disease.

Gene Wilder was born Jerome Silberman and took the stage name Gene Wilder later in life. He was 83 when died, surrounded by loved ones.

In the wake of the news, the world mourned its loss, while remembering all the laughter and iconic characters Wilder immortalized.

Over the years, Gene Wilder worked as a stage actor, novelist, screenwriter and actor. Most people know him best for the acting he did in films, some of which he wrote.

Many of his roles are iconic. Most people can picture him playing Willy Wonka, even if they haven’t seen the movie itself. And many of the jokes in movies like Young Frankenstein (one he helped write) and Blazing Saddles have entered the public consciousness. Mention Dr. Frankenstein’s attempts to “walk this way” while following Igor or Inga’s “roll in the hay” and you’re likely to get knowing chuckles in response.

Gene Wilder was nominated for multiple Academy Awards, for both his acting and his screenwriting. He made history in his famous partnership with Richard Pryor as the first interracial duo to star in successful comedies together.

In his older years, Wilder retired from Hollywood to focus more on writing, spending time with his family, and hobbies like painting watercolors.

Gene Wilder was diagnosed with Alzheimer’s three years before his death, but he and his family chose not to divulge the diagnosis to the public. The family released a statement saying they made the decision out of a desire to keep young fans of his Willy Wonka character from having to grapple with the disease, saying that he “simply couldn’t bear the idea of one less smile in the world.”

Many families have experienced something similar to what Gene Wilder and his family dealt with over these past years. Over 5 million people in the United States alone are believed to have Alzheimer’s and the numbers are only expected to grow.

Unlike some of the patients who suffer with Alzheimer’s disease, Wilder did maintain his ability to recognize his closest family members. His loved ones say his core personality essentially remained intact throughout his time with the disease.

According to the statement his loved ones shared, he had a peaceful death, listening to one of his favorite songs sung by Ella Fitzgerald, “Somewhere Over the Rainbow.”

Living with Alzheimer’s is difficult for everyone. The symptoms of the disease are hard for patients and their loved ones to cope with. By all accounts, in his final years Wilder managed to rise above the difficulties of his illness and continue to enjoy the most important things life, including his family.

His life, at least at the end, is a reminder for all the families dealing with this illness that Alzheimer’s isn’t a death sentence. It’s difficult and takes some work to manage, but a loved one with Alzheimer’s is still a loved one and you can have a meaningful life together right up until the end.