SeniorAdvisor.com Blog > Blog for Families > Retirement Planning > Success at Every Age: People Who Made it Big after 50

Success at Every Age: People Who Made it Big 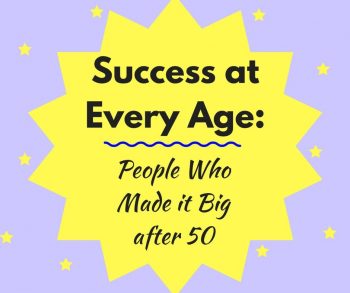 Do you still wonder what you want to be when you grow up? You’re in good company, because plenty of people hit their stride or start a second career at midlife and later. Duncan Hines, Judge Judy, and Julia Child are just some of the well-known people who made names for themselves late in life. The cake-mix brand namesake, television judge, and world-renowned chef had very different careers with one thing in common: They all earned major success after the age of 50.

Duncan Hines got into the food business in his 70s

The cake mixes that bear his name were a third career for the late Duncan Hines, who started licensing his name to baked goods and mixes in the 1950s, when he was in his early 70s. He had already made a wildly successful second career, writing restaurant and hotel guides for American road-trippers. His work as an author and critic, which made him famous enough to warrant the cake-mix business, began when Hines was 55 years old. It grew from his extensive travels during his first career as a traveling salesman for a printing business.

The lesson: Your next career can be sweeter than your last.

Judge Judy’s courtroom show debuted when she was 53

The road to the longest-running courtroom show on TV wasn’t always an easy one. Biography.com notes that when Judith Blum (now Judy Scheindlin) started law school in the early 60s, she was the only woman in her class. A dull early career, time out of the workforce to care for her children, and a divorce all could have knocked her off track. Her career change to prosecution and later, family court judge, paved the way to TV fame, as her reputation for fair but blunt justice grew. She retired from the bench in 1996 at age 53 and that same year launched “Judge Judy.” She’s appeared in more than 5400 episodes, and her contract runs through 2020. In 2013, she was the highest-paid star on television, earning $47 million per year.

The lesson: Hard work, determination, and a good reputation can really pay off.

Is there any foodie or serious home cook in the US who isn’t familiar with Julia Child? After a wartime stint with the Office of Strategic Services and her marriage to co-worker Paul Child, Julia found herself in Paris with time on her hands and a desire to learn to cook like the French. As her culinary skills grew, so did her eagerness to share her knowledge with American cooks. In her late 40s, she and her friends published Mastering the Art of French Cooking, and she was 50 when her PBS show, The French Chef, debuted. Child, who died in 2004 at age 91, continued writing and television careers well into her 80s.

The lesson: Find something you love and keep at it.

Anti-Aging Tips for Your Hair
Worried About Elder Falls? How Tai Chi Can Help Seniors