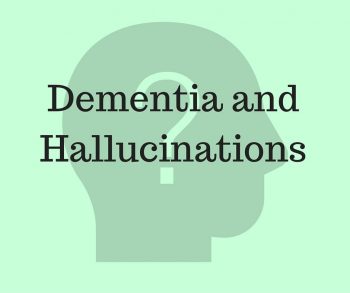 Dementia comes with a lot of troubling symptoms and behavioral changes. If you have a loved one suffering from dementia, one of the issues you should learn to expect and manage is the onset of hallucinations.

In addition to the other effects that diseases that commonly cause dementia can have on the brain, they also sometimes damage the visual system. While dementia patients are already dealing with increased confusion and difficulty understanding their surroundings, they also have a harder time visually recognizing what’s in front of them.

That can lead to frequent misinterpretations of what they see around them. While this is different than a hallucination, for caregivers the confusion this produces is a similar problem to deal with. Your loved one might see a face where there’s a glare on the wall, think their reflection in the mirror is an intruder, or confuse a daughter for the sister that died years ago.

Actual visual hallucinations can also occur though. While they are a symptom of Alzheimer’s in some cases, they’re more commonly associated with lewy body dementia and Parkinson’s disease.

The most frequent form these hallucinations take is visual – patients believe they see a person or animal that’s not actually there. For patients with lewy body dementia, these hallucinations typically occur daily. While not as common, some patients also experience olfactory, auditory, and tactile hallucinations as well, meaning that they smell scents that aren’t really there, hear sounds no one else hears, and are convinced they can physically feel things that aren’t there. If your loved one starts to show signs of one of these types of hallucinations, it’s important to talk to your doctor about it as it could be the sign of something serious.

How to Manage Hallucinations in a Dementia Patient

The best way to help a person who’s experiencing hallucinations is to try to direct their attention elsewhere. Your first impulse may be to try to convince them that they’re wrong and nothing’s there, but that’s likely to make them agitated and harder to handle. So instead, try to change the subject or get them to pay attention to something else you know they’re interested in.

If the hallucination is something they find troubling or scary, focus on comforting them. Again, don’t try to talk them out of their perceptions, focus on talking them through their fears or discomfort with the aim of calming them down.

Treatments for Hallucinations Caused by Dementia

In some cases, a doctor may decide that anti-dementia drugs or anti-psychotics can help, but the side effects some of these drugs cause make them a last resort for many physicians. It’s possible, if the hallucinations aren’t posing any real threat to you or your loved one, that a doctor will simply recommend working to manage them as they arise rather than trying to find a treatment that will eliminate them.

As with many symptoms associated with dementia and the diseases that cause it, the best treatment is finding a way to live with the changes a patient goes through while keeping their life (and yours) as enjoyable as possible, in spite of the disease.

How to Apply for VA Benefits
Sister’s Day Gifts