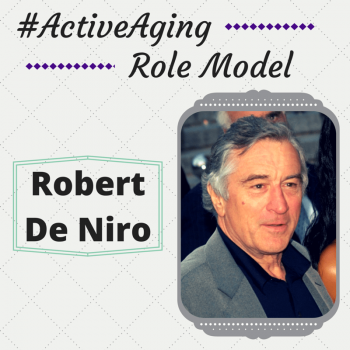 Moviegoers of all ages will recognize our Active Aging Role Model Robert De Niro; afterall, he’s starred in more than 90 films and won two Academy awards, two Golden Globe awards, and has been nominated for countless other awards in multiple countries. Not only do his films span decades, but his acting talent ranges from the serious, to the hilarious, to the spooky and disturbing. He’s even been the voice of animated characters, ensuring that he’s taken part in almost every film genre.

Born in 1943 in Greenwich Village, De Niro grew up with artist parents hailing from a colorful combination of Italian, Irish, German, and other European heritages. Though his parents divorced when he was just three years old, they lived within walking distance of each other and De Niro spent his formative years with both. Growing up, he attended various private and public schools until finally dropping out at age 16 to pursue acting full-time and attend acting conservatories.

Foreshadowing some of his more memorable Italian-American roles, De Niro often hung out with a group of street kids in Little Italy who would remain lifelong friends. He was often called “Bobby Milk” because of his complexion. As he grew older, he became obsessed with the cinema, and discovered acting as a way to battle his shyness.

Although his first stage performance came at the age of 10 as the Cowardly Lion in The Wizard of Oz, De Niro would receive his first film role at the age of 20 when he appeared in Brian De Palma’s 1963 film The Wedding Party.  He gained widespread attention with his role as a dying Major League Baseball player in Bang the Drum Slowly in 1973, and soon thereafter began his first collaboration with Martin Scorsese when he played the small-time criminal in Mean Streets. He would later go on to work with Scorsese on iconic films such as Taxi Driver, New York, New York; Raging Bull (for which he won an Academy Award), The King of Comedy, Goodfellas, Cape Fear, and Casino.

De Niro’s first Academy Award came from his pivotal role in Francis Ford Coppola’s The Godfather Part II, where he played the young Vito Corleone. De Niro had actually auditioned for several roles in The Godfather, the first film in the series. With his performance in the second film, he was awarded the Academy Award for Best Supporting Actor, making him the first actor to win an Academy Award speaking mainly a foreign language. Interestingly, De Niro and Marlon Brando (who played the older Vito Corleone in the first film) are the only actors to have won Oscars for portraying the same fictional character.

Although De Niro’s mastery of the serious and even disturbing characters is quite obvious – along with his ability to create iconic scenes (like Taxi Driver’s, “You talkin’ to me?”) – De Niro also has a talent with comedy, playing the straight man opposite Ben Stiller in the series of Meet the Parents films, and also with Billy Crystal in the Analyze This films. In 2004, he lent his voice – along with Will Smith, Renée Zellweger, Angelina Jolie, Jack Black, and Martin Scorsese – to DreamWork’s animated film, Shark Tale.

Of course, De Niro doesn’t seem to be slowing down anytime soon. In 2011, he served as the President of the Jury for the 64th Cannes Film Festival. In 2012, he starred in the films Silver Linings Playbook (receiving a nomination for an Academy Award for Best Supporting Actor), Freelancers, Red Lights, and Being Flynn. In 2015, De Niro announced he would soon be portraying Enzo Ferrari, an Italian motor racing driver and entrepreneur, founder of the Scuderia Ferrari Grand Prix motor racing team, and the Ferrari automobile brand.