SeniorAdvisor.com Blog > Blog for Families > Age Discrimination in the Workplace: Know Your Rights

Age Discrimination in the Workplace: Know Your Rights 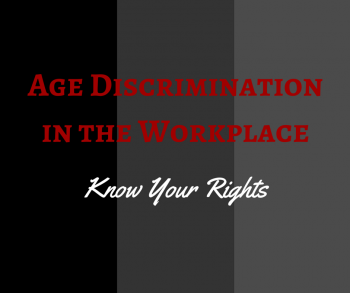 In a competitive marketplace, it’s good to know your rights under the law. And if you are over 40 years of age, you should be especially aware of the Age Discrimination in Employment Act (ADEA).

As you age in the workplace, you may begin to recognize the subtle signs of the challenges faced by older workers, especially those looking for a new job, or those who have been in their job for a substantial amount of time. Several factors connected with aging can come into play in a hiring manager’s mental calculations… how this person might impact the cost of health care for the company, how long until he or see would retire and need to be replaced, how he or she might impact the company’s pension plan.

While a manager must have good business sense, the United States Congress recognized that a good worker should not be penalized simply for aging. The ADEA was originally passed in 1967 and later amended in both the 1980s and 1990s, and forbids age discrimination against people who are age 40 or older. The law applies to companies with more than 20 employees, including state and local government agencies and labor organizations.

How the ADEA Protects Older Workers

It is true that providing certain benefits to older workers has the potential to be more expensive than providing the same benefits to younger workers, and this can make employers less willing to hire an older person, even if he or she is the most qualified for a position. However, the ADEA helps ensure that all applicants are given a fair chance at an open position, regardless of age. While the law does not specifically prohibit an employer from asking for an applicant’s date of birth or age during the hiring process, the reason for doing so must be lawfully legitimate and may be scrutinized. This information may be legally attained after a person is hired.

Also as a result of the ADEA, it’s unlawful for someone to be harassed in the workplace because of his or her age. While this may exclude simple teasing, offhand comments, or isolated incidents, harassment is illegal when it is so severe or frequent that it creates a hostile work environment. In fact, age discrimination can sometimes lead to the victim being fired and demoted, adding injury to insult. The harasser can be a supervisor, a co-worker, or even someone who is not an employee, such as a client or customer.

What To Do If Age Discrimination Affects You

If you feel that you may be seeing signs of age discrimination at your workplace, you should take it seriously. Begin to keep discrete records of the red flags of discrimination or harassment. This can include not being offered the same training or promotion opportunities as younger coworkers, being held to different standards, or suddenly being written up for disciplinary actions when you have previously had a stellar record.

Again, harassment can also be in the form of jokes and constant teasing, if it is serious or unrelenting, so you might consider tracking specific examples of this as well. You may even want to get a consultation from an employment lawyer in your state to learn more about your rights and get an outside perspective on what you feel is occurring in your workplace.

In an ideal world, hardworking employees would be allowed to work as long as their performance excels, regardless of their age or how close they may or may not be to retirement. They would be able to pursue new jobs, even later in life, without the fear that no matter how qualified they are, they will be looked over for a younger applicant. Hopefully, this is your current experience. But if it is not, your next best tool is knowledge of the law and the ADEA is the right place to start.

What Happens to Your Debt When You Die?
Living Trust vs. Will