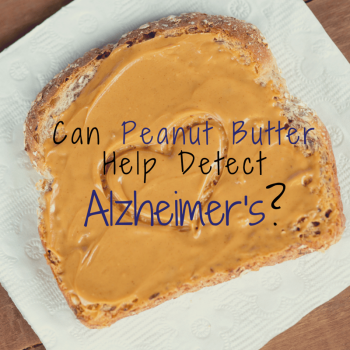 Alzheimer’s disease can go unnoticed for years, often disguised as other maladies or simple personality quirks. Since doctors are often rushed when visiting with patients at check-ups, there is often little time for the in-depth conversation and investigation needed to notice the warning signs of dementia.

Doctors have traditionally relied on the “mini-mental test” that includes a series of questions that everyone “should” know, such as the day of the week, the name of the President, and where the numbers should go on a clock face. These tests can put the patient under additional stress and even cause embarrassment, since they are often conducted in front of family members or medical staff.

A newly discovered test, however, is proving helpful in confirming the presence of Alzheimer’s disease and can be given at home, simply by using one of the most common items in most people’s pantries: peanut butter.

A person’s sense of smell is often the first sense to go in cognitive decline, even before obvious memory loss. A neurologist at the University of Florida recently discovered a quick and easy way to confirm the presences of Alzheimer’s disease leveraging the fact that peanut butter contains hundreds of complex molecules that trigger nerves leading to the sensory system, and is a smell that is retained even into old age.

To perform the test, the patient should close his or her eyes and mouth, then plug one side of the nose. The tester carefully holds one end of a ruler up to the patient’s nose, and begins with a small cup of peanut butter at the other end (or bottom) of the ruler. Slowly, the cup is moved up the ruler, closer to the patient’s face. When the patient can smell the peanut butter, the tester notes the distance from the nose. The process is then repeated on the other side of the nose, again with closed eyes and mouth, and the opposite nostril plugged.

Theoretically, if there is a difference in how soon the peanut butter is smelled, it represents the presence of Alzheimer’s disease in part of the brain. For example, if the patient smells it much more quickly on the left side than the right, the disease has not yet progressed to the left side of the brain but could be present on the side that had more difficulty detecting the smell.

While many are praising this at-home test for its lack of intrusiveness and embarrassment to patients and families, others caution putting too much stock in such a simple process. The test is currently only being used to confirm, not diagnose, the presence of Alzheimer’s disease.  Other researchers have found the tests to be less than conclusive, so it is always a good idea to visit with your loved one’s doctor as soon as you begin having concerns about signs of dementia.

Catching Alzheimer’s disease earlier can allow for a more aggressive treatment to help slow or prevent memory loss. For more information on performing the test, watch this video from the University of Florida.

And if you’re looking for Alzheimer’s care in your local area, check out the ratings, reviews, and pricings on SeniorAdvisor.com or give us a call toll free at (866) 592-8119 to speak with a local care advisor for free.

Pneumonia in the Elderly
Broncos vs. Panthers – Super Bowl Fans, Where Should You Retire?