SeniorAdvisor.com Blog > Blog for Families > Senior Health & Fitness > The Secret to a Long Life, According to Centenarians

The Secret to a Long Life, According to Centenarians 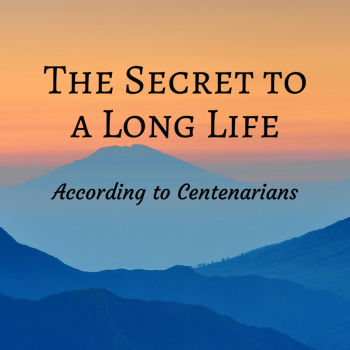 What’s the secret to a long life? Humans have wondered for as long as we’ve existed as a species. We haven’t found the fountain of youth, but people in recent years have been living longer than ever. Reaching 100 – and even going several years beyond – is no longer all that odd of an occurrence.

A certain amount of making it to 100 is about luck. Some people are inevitably stuck with genetic diseases, and those felled by wars wouldn’t have benefited from health advice. But a certain portion of what gets you there is lifestyle. The choices you make now do make a difference in how long you live and what those late years of life look like.

Here’s a roundup of what some centenarians and researchers say works best.

A small village in China is famous for being home to a disproportionate number of residents that live past the age of 100. This article looks at what’s behind the residents’ longevity. Some of the main habits that researchers identified in their quest to understand what was behind those long lives are:

2. 7 Life Secrets of Centenarians – Next Avenue

This post summarizes a book entirely devoted to the subject of what centenarians say about living longer (and better). Here’s a summarized version of the seven main tips the authors took away from their research:

You don’t have to go all the way to China to find centenarians living an active, happy life. This NY Post article reveals what some local New Yorkers say about the habits that helped them reach a healthy old age. A few specifics they share are:

This Forbes article takes a research-based approach to why some people live longer than others. Oddly enough, their research found that many of the centenarians they studied had the same habits and risk factors as many other members of the population: obesity, a history of smoking, a lack of regular exercise. This researcher’s results suggest that the secret’s in the genes: if your parents lived a long life, you stand a pretty good chance of doing so as well.

They’re still trying to figure out how to turn their research into a way to help the rest of us out as well, but for now it suggests that at least some of those centenarians are just lucky.

5. Here Are the Secrets to a Long and Healthy Life – National Geographic

National Geographic’s researchers found more at play than just genes in their study blue zones, geographic areas like that village in China that have an abnormal number of people living into their 100s or close to it. They found both some obvious tips and not-so-obvious features of the lifestyles of people in the blue zones:

You’re probably not surprised to see healthy diet or good genes show up on many of these lists, but two of the most consistent tips may surprise some readers. Physical movement is important, but it doesn’t have to be focused cardio or pilates classes – simply having an active physical life that includes things like farming or lots of walking seems to do the trick. And one of the absolute most important features of a long, healthy life that comes up is community. Having a social support network, whether it’s your biological family or another community you interact with regularly, seems to play a key role.

While how long you live isn’t entirely in your control, there are steps you can take to increase your chances of being a jolly centenarian somewhere down the line. Good luck.