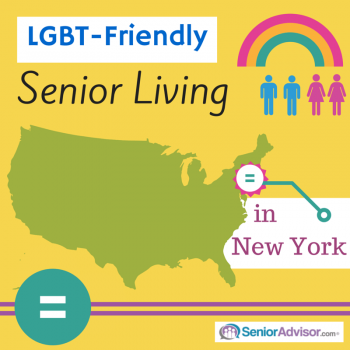 New York City makes a great retirement location for a lot of reasons, including plenty of things to see and do, lots of opportunities for walking, public transportation that eliminates the need to drive, and densely populated neighborhoods that can help keep seniors engaged with the people around them. And while LGBT seniors in New York face the same housing challenge other residents do — finding an affordable, available place in a good neighborhood — connecting with a welcoming and inclusive community is an additional concern.

LGBT housing and aging in place services in the city

SAGE also works with naturally occurring retirement communities (NORCs) on the Upper West Side, Harlem, and East Harlem by bringing senior services and programming to LGBT neighborhoods that are graying over time. Social workers, housing advisors, and home health workers are trained to work with ethnically diverse LGBT populations in these neighborhoods. The group also publishes a guide to LGBT issues in caregiving for family members who are helping a senior at home.

For seniors who love the city but would rather live in the suburbs, the Long Island GLBT Network plans to break ground in 2015 on the tri-state area’s first LGBT senior housing complex, with units ready for move-in in 2016. The 50-unit property will be located in Bay Shore and will also be home to the network’s new community center. That means residents will have easy access to classes, social events, and holiday celebrations that include the broader Long Island LGBT community.

The Village Voice keeps an up to date list of LGBT nightclubs, social groups, museums, and other points of interest around New York, such as the Leslie & Lohman Museum of Gay and Lesbian Art. Leslie & Lohman operates two gallery spaces in SoHo that feature fine art, film screenings, lectures, and other art events. In the West Village, The Stonewall Inn is open daily from 2 p.m. to 4 a.m. for drinks, dancing, and a history lesson on the 1969 Stonewall Riots at the spot “where pride began.”

How Much Does New York Assisted Living Cost?

How Much Do New York Nursing Homes Cost?

Find assisted living in New York near you.