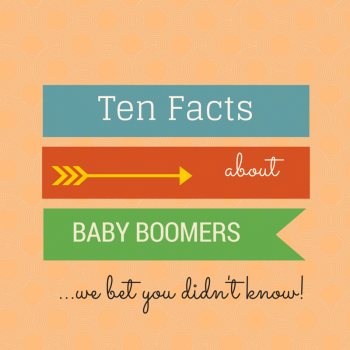 It’s the Baby Boomers’ world; the rest of us just live in it. This famous generation has been catered to, criticized, studied, and marketed to from the time they were just babies growing up in newfangled post-war suburbs. Now they’re trying to balance caregiving and work, enjoy retirement, further their careers, or find care for themselves. Here’s our look at the group that’s influenced everything from child-raising practices to senior care.

10 Facts About Baby Boomers We Bet You Didn’t Know

The 76 million Americans born in the “baby boom” between 1946 and 1964 have influenced our country’s arts, politics, workplaces, and lifestyles over the past several decades. If it seems like you’ve heard all there is to hear about Boomers, here are ten things you may not already know about the Baby Boom generation.

1. They’re Online – and in Great Numbers

According to a Google study, 78% of Boomers were online by 2013. A full one-third of all Boomers online describe themselves as “heavy internet users,” and 82% of Boomers belong to at least one social media platform. They also spend more time online each week than Millennials—and they use a lot of that time to research news and politics.

According to a 2014 report by the US Census, the number of Boomers who live in the US but who were born in another country is on the rise. Today approximately 10 million foreign-born Boomers call America home.

While not cheap, Boomers don’t believe in spending money needlessly. 79% of Baby Boomers believe that store brands are an excellent option instead of name brands.

While this fact isn’t fun, it is important. According to the Centers for Disease Control and Prevention, Boomers are five times more likely than other generations to be infected with Hepatitis C. Since Hep C can sometimes take years to exhibit symptoms, Boomers are encouraged to get a blood test.

6. More Boomers Live in Maine than Any Other State

At 69.6%, Colorado has the highest percent of Boomers who have at least some college education. In the top ten states where Boomers have some college experience, AARP reports the percentages are all over 50%.

8. The Past Four Presidents are/were Boomers

A recent survey from the National Endowment for Financial Education found that 59% of Boomer parents provide financial support for adult children aged 18 to 39.

10. They’re Not the Stereotypical “Senior Citizens.”

Many Boomers are still quite active and energetic. For instance, Jerry Seinfeld (born in 1954), Stevie Nicks (born in 1948) and George Clooney (born in 1961) are all Boomers.

Just because the Boomer population is aging doesn’t mean they’re necessarily slowing down. Baby Boomers are expected to influence the world for decades to come.

What was the precursor to the baby boom?

Popular lore says the rising tide of births in 1946 and beyond—over 3 million per year in some of those years–was because of young married couples reuniting after the end of World War II. Historians say that’s not the only reason so many babies were born during the boom years. History.com points out that older couples who had waited to start families because of the Great Depression began having kids of their own once the war ended and the economy finally seemed stable and prosperous enough to raise children in middle-class comfort.

The generation having these babies was, by and large, a group known now as the Greatest Generation. News anchor and writer Tom Brokaw gave the group that name in his book about these Americans, who came through the hardships of both the Great Depression and WWII. Some Boomers may have had young parents or older siblings who were part of the Silent Generation born between 1925 and 1942. And when the Baby Boomers started having kids of their own, those children became known as Generation X, a much smaller generation than the Boomers, born between 1965 and 1984. Many Baby Boomers now have grandchildren in the Millennial generation, which is almost as large as the Baby Boom was at its peak.

What are Baby Boomer values?

Besides sheer numbers, the young Baby Boomers were a new type of force in American culture. As children, many grew up in what we think of now as traditional family settings: suburban homes on neatly kept lots with stay-at-home mothers and fathers who commuted to work. That’s a far cry from the experiences of the Greatest and Silent Generations, who had to cope with financial insecurity and the rigors of war when they were young. This generational difference in upbringing shaped the way the Boomers approached nearly every aspect of life.

Boomer politicians have dominated the American landscape for decades now. In addition to our four Baby Boomer presidents, Boomers now make up the majority of Representatives and Senators. While it makes sense that a generation raised on idealism would seek long careers in politics, some observers point out that these Boomers’ deeply entrenched idealism can contribute to legislative gridlock.

That Boomer idealism has reaped some big results over the years. Compared to their parents’ generation, Boomers were more likely to protest policies and social practices they saw as unjust. Many Boomers were children when the Civil Rights Movement was breaking down Jim Crow-era barriers of segregation and they observed how the adults in their lives viewed that cause. Later, Boomers were the driving force behind anti-war protests during the Vietnam era, the push by women to move into “non-traditional” careers like business and engineering, and the gay rights movement to protect the LGBT community.

Baby Boomers made over the American arts and entertainment twice—first as audiences and later as musicians, writers, actors, and fine artists. From Elvis’ scandalous moves on the Ed Sullivan show and Chubby Checker’s dance hits to Beatlemania and Woodstock, Boomers made rock and roll the centerpiece of their youth culture.

Film studios catered to young audiences’ tastes with movies featuring Presley and the Beatles. Boomers flocked to the movies to see James Bond films, John Wayne’s westerns, and sci-fi movies like 2001: A Space Odyssey, Planet of the Apes, and Westworld.

Later, Boomers who worked in film, music, and TV reshaped those mediums with their approach to their work. Oprah Winfrey made over the daytime talk genre by focusing on personal development and empathy rather than scandal. Ellen DeGeneres, another Boomer, later broke a longstanding taboo in television by coming out as a lesbian. In film, Boomers like Meryl Streep and George Clooney have built decades-long careers as actors and second careers as philanthropists. Boomer musicians like Bruce Springsteen, Madonna, Billy Joel, and Michael and Janet Jackson influenced not only their peers but younger Generation X listeners with their work.

As with music and movies, Baby Boomers reshaped America’s reading habits. The era from 1946 to 1964 was a time when many of the 20th century’s most notable writers published their best works, new voices came to the fore, and kids’ literature flourished. A list of all the great books of the day would require dozens of pages, so we’ve picked a few titles that stand out for their nostalgia value, classic themes, fresh views, and plain old fun.

We’ll start with the parenting bible for the new wave of postwar families. Dr. Benjamin Spock’s Common Sense Book of Baby and Child Care debuted in 1946, just in time for the arrival of the first babies of the Boom. Revised and updated editions have been in print ever since, carrying on Dr. Spock’s famous exhortation to new parents to “Trust yourself. You know more than you think you do.”

Plenty of enduring children’s literature emerged during the boom years. Goodnight Moon, Margaret Wise Brown’s popular picture book for bedtime, and Fred Gipson’s classic but heartbreaking dog tale Old Yeller, were first published during the boom years. The first book by author Beverly Cleary, Henry Huggins, came out in 1950, the first of more than popular 30 books she wrote for kids.

Arguably the most enduring children’s book of the era, E.B. White’s Charlotte’s Web, was first published in 1953. The story of friendship between a piglet and a spider still tops lists of best children’s books as chosen by librarians and teachers, and it’s been translated into dozens of languages. In 2000, more than four decades after its debut, it was the best-selling children’s book in American history, according to NPR.

Signs of the times

Books that humanized world events, warned of Cold War dangers, and challenged the status quo flourished after World War II as well, beginning in 1947 with the publication of Anne Frank’s Diary of a Young Girl. As the Cold War ramped up, George Orwell’s 1984 and Animal Farm issued warnings about communism, Ray Bradbury’s Fahrenheit 451 responded to the excesses of the McCarthy era, and Joseph Heller summed up the confounding aspects of war in Catch-22.

Women were redefining their own roles in society during this time. Simone de Beauvoir’s The Second Sex and Betty Friedan’s The Feminine Mystique, helped a generation of women to start expanding the number of career and social options open to them.

African-American writers were chronicling their experiences and frustrations, such as James Baldwin’s novel, Go Tell It on the Mountain, an exploration of religion in African-American life that hinted at Baldwin’s own struggles as a gay man. Ralph Ellison’s award-winning Invisible Man addressed the role of politics in Black American life.

Novels for the ages

This was the era of Hemingway, Tennessee Williams, Carson McCullers, and C.S. Lewis. Among the novels of the day are often required reading for teenagers today are William Golding’s dystopian survival tale Lord of the Flies, Harper Lee’s examination of race and justice To Kill a Mockingbird, and the ultimate tale of teen alienation, J.D. Salinger’s The Catcher in the Rye.

Baby Boomers in the Sandwich Generation

Many members of this influential generation now find themselves in another unique group: the “sandwich generation.” This is the group of mid-life and older adults who are taking care of aging parents and raising children or grandchildren at the same time. While the oldest Boomers are reaching an age where they may need assistance of their own, younger Boomers are trying to find ways to balance caring for Mom and Dad, the kids, their careers, and themselves. Doing it all may involve hiring in-home help, using concierge services, finding reliable respite care, and locating other community resources to get everyone’s needs met.

If you need senior living advice

Finding the right care options for your family can be challenging. Visit SeniorAdvisor.com to see reviews, ratings, and prices for assisted living, in-home care and more. You can also give us a call toll-free at 1-800-805-3621 for information about specific senior-care options in your area.