SeniorAdvisor.com Blog > Blog for Families > Senior Health & Fitness > What are the Symptoms of a Stroke?

What are the Symptoms of a Stroke? 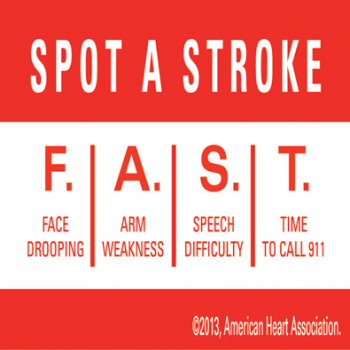 If you or someone you know were having a stroke, would you know it? One in six of us will have a stroke at some point, and anyone can have one, even children, although women, older adults, and people of non-Caucasian heritage are at higher than average risk.

The bad news about stroke is that it’s the most common cause of disability among Americans and the fifth most common cause of death. The good news is that in many cases, stroke damage can be limited by a clot-busting treatment called tPA—as long as the patient gets help within 3 hours of his or her first stroke symptoms.

That small but crucial window of opportunity for “the gold standard” in stroke treatment means spotting a stroke quickly is the key to getting the most effective help. Doctors say the best way to decide whether to get help is to think “FAST” when these symptoms appear suddenly:

– Face drooping happens when muscles on one side of the face are paralyzed from lack of oxygen or increased pressure on nerves. Sometimes drooping is accompanied by numbness. Not sure whether it’s really happening? Try to smile — during a stroke, the smile is often visibly lopsided.

– Arm weakness on one side of the body. Some people find they cannot move one arm at all during a stroke. Others have more subtle arm problems. A quick test is to try to raise both arms to an equal height. If one arm stays lower than the other or sinks down, it could be due to a stroke.

– Speech difficulty during a stroke can range from slurred or garbled speech to a complete inability to talk. Stroke victims usually can’t repeat a simple sentence clearly.

– Time isn’t a symptom but it is a major factor in treatment and recovery. Doctors say it’s time to call 911 as soon as you or someone else shows any of these signs of a stroke. If you can, make a note of the time when symptoms started, because elapsed time will affect treatment. Strokes can be fatal or disabling, so it’s far better to be safe than sorry when possible symptoms appear.

Besides face drooping, arm weakness, and speech problems, a stroke can bring on other sudden problems. These include:

Unlike heart attack symptoms, which may vary by gender, stroke symptoms are generally the same for both men and women.

Stroke symptoms may suddenly appear and then go away within a few minutes. If that happens, don’t cancel that 911 call. Continue to the emergency room, where doctors can determine if the symptoms were caused by a transient ischemic attack (TIA), a so-called “mini-stroke” that can serve as a warning that a major stroke is coming. As many as 40% of TIA patients will go on to have a stroke, which means diagnosis and treatment are critical.