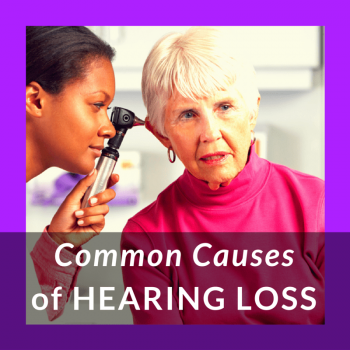 Human communication – talking, reading, listening and interacting is paramount to well-being. The importance of human interaction is key in this age in which “smart” devices occupy an ever-increasing amount of time and prominence in our lives. Helen Keller, blind and deaf from an early age, said that she missed her ability to hear the most. She added that, while blindness kept her separate from things, hearing loss separated her from people, and human connections.

About 34 million Americans have lost some of their hearing – 11% of the population. Moreover, the number of Americans with hearing loss has doubled since 1985 as Baby Boomers age and because younger people have hearing loss due to noise exposure. Recent studies show that correcting hearing loss with hearing aids can keep hearing impairment from getting worse.

In honor of Better Speech and Hearing Month this May, let’s take a look at the common causes of hearing loss as you age.

Tinnitus is a fancy name for “ringing in the ears,” which can be noises such as roaring, clicking, humming, or buzzing. Most tinnitus is caused by damage to the microscopic endings of hearing nerves in the inner ear. These nerve endings enable acute hearing, and injury to them can cause hearing loss or ringing in the ears. Tinnitus is sometimes a natural companion of advancing age. Medical treatments and assistive hearing devices can be helpful to those with constant ringing or noise in their ears.

Another problem to be aware of is earwax or cerumen. It’s produced by glands in the outer ear canal and is meant to trap dirt particles to keep them from reaching the eardrum. Normally the wax accumulates, dries, and falls out of the ear or is wiped away. A common and treatable cause of hearing loss is earwax that has accumulated. Cotton swabs are not recommended to remove earwax as it pushes the earwax deeper. Excessive earwax may be chronic so that it needs to be treated by a physician.

A perforated eardrum is a hole in the eardrum. This is often accompanied by decreased hearing and sometimes a discharge or pain. The hearing loss depends on the extent and location of the perforation. Some perforated eardrums heal spontaneously, others require surgery. Problems may occur if water or bacteria enter the middle ear through the perforation. A doctor can advise you on protection of the ear from water and bacteria until the hole is healed.

Hearing Loss as You Age

Hearing loss in older people is called presbycusis. According to the National Institute on Deafness and Other Communication Disorders (NIDCD), it is caused by changes to the structures and flow of blood to the inner ear, the hearing nerve, and how the brain processes speech and sounds.

Older people typically have a gradual high-pitched hearing loss that can be noticed by difficulty hearing the voices of women and children.  Background noises are lost and speech clarity is lost. Hearing loss caused by aging can be made worse by diabetes, poor circulation, noise exposure, and certain medications.

Between 30-35% percent of adults between sixty-five and seventy-five years of age have some hearing loss. Untreated hearing loss can lead to depression, anxiety, fear, and less social interaction. If you haven’t gone through a hearing test in a while, the NIDCD offers a quick self-assessment you can use to determine whether it’s time to make an appointment.

Elder Abuse in Nursing Homes
How To Get Better Sleep