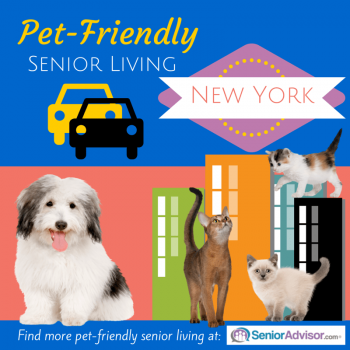 The Big Apple has a well-earned reputation as busy and urban to its core. But New York City has a pet-friendly side, too, and there are lots of choices for locals who want to take their four-legged friends out on the town. With an unparalleled number of off-leash park areas and runs, more than a hundred dog-friendly cafes and restaurants, and (yes) personal trainers for dogs, the “city that never sleeps” knows how to put on the dog.

A walk in the park or a night at the club

Despite New York’s hyper-urban environment, the city offers dozens of off-leash green spaces and enclosed runs for dogs to frolic and hang out together. The Central Park Conservancy site offers a map of 23 off-leash sites within Central Park alone, from Harlem Meer at the park’s north end to the area between the carousel and Wollman Rink at the south end.

Other off-leash areas and runs can be found around Manhattan in Washington Square, Tompkins Square, Marcus Garvey, and Chelsea Waterside parks, among others. The city’s other boroughs all have dog parks and runs of their own. At public parks and beaches, check the signs because off-leash times may vary by day and by season.

After all that romping around, Fetch Club members have the option of dropping in for a social time during Night Club hours. The South Street Seaport dog destination also offers classes, daycare, grooming, boarding, shopping, and a fitness center with canine-adapted treadmills, weights, and personal training services.

Upper Manhattan is the cat’s meow for dog owners who love to dine out. Among the city’s 100-plus dog-friendly eateries are two popular Third Avenue restaurants, Fetch Bar & Grill and Barking Dog. Barking Dog’s breakfast, lunch, and dinner menus focus on classic American and UK dishes, and its weekend brunch is popular with the locals. The dog bar on the patio serves up fresh water for thirsty pets, while the people bar keeps human guests refreshed and relaxed.

Just down the block, Fetch Bar & Grill offers brunch, lunch, and dinner options like Black Forest ham and Swiss omelets, veggie wraps, and Philly cheesesteaks made with bread delivered daily from Philadelphia. As part of its mission, Fetch partners with a local animal shelter to help find homes for strays and rescued animals.

The leader of the dog show pack

The New York metro area is home to dozens of independent living and assisted living communities that welcome residents’ pets. Outside the city itself, suburban options include communities in Westchester County and in New Jersey.

How Much Does New York Assisted Living Cost?

How Much Do New York Nursing Homes Cost?

Find assisted living in New York near you.