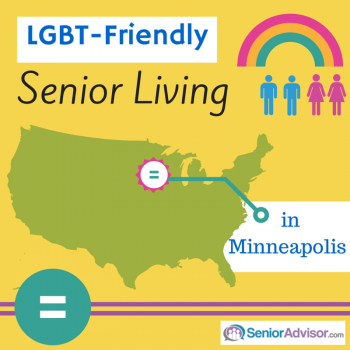 Minneapolis has earned its reputation as a progressive, LGBT-friendly city. While Minnesota’s state law allowing same-sex marriage was enacted in 2013, the city of Minneapolis had a domestic partnership ordinance on the books in 1991. This year, Minneapolis and its twin city, St. Paul, made personal-finance site NerdWallet’s list of the top 10 LGBT-friendly cities in the nation. And Minneapolis is home to the state’s first senior living community designed specifically for low-income LGBT seniors.

With its LGBT-friendly credentials, energetic arts and culture scene, and an intriguing blend of neighborhoods, Minneapolis has a lot going for it as a retirement destination—especially for seniors who don’t mind winter snow.

The areas of the city with the most LGBT businesses and nightlife options are downtown, Uptown, and the Loring Park neighborhood. But there are welcoming neighborhoods across the city. For example, Midtown is home to the Spirit on Lake senior LGBT community, the first of its kind in Minnesota. Other senior communities like Loren on Park are also located in Midtown, giving residents easy access to dining, shopping, and more.

Just southwest of the downtown area is the city’s top-rated attraction, the Minneapolis Institute of Arts. MIA is a great place to spend the day with friends, browsing the 80,000 artifacts and works of art. In downtown itself, there are more than a dozen gay bars and clubs to suit every taste, from drag shows to darts and billiards.

Speaking of church, there are more than 2 dozen churches and temples in Minneapolis and the greater Twin Cities area that make a point of welcoming LGBT worshippers. Twin Cities Pride maintains a list that includes Catholic, Protestant, and Reform Jewish congregations.

Twin Cities Pride also coordinates June Pride Month in Minneapolis. Loring Park is the main gathering place, with a family picnic, 2-day festival, and parade as part of the fun. The events are coordinated by Twin Cities Pride, which also hosts and promotes community events throughout the year, including film festivals, voter registration drives, and classes and conferences on issues of gender, orientation, race, and religion. Twin Cities Pride also gives seniors and other members of the community lots of ways to help through volunteer work on special events, year-round planning teams, committees, and more.

Niche social groups abound in Minneapolis, too, like the Prime Timers group for senior gay and bisexual men that get together for breakfasts, book club meetings, and other events. For seniors who like their recreation with a Western accent, the North Star Gay Rodeo Association sponsors social events like dances, river cruises, and rodeo events. Other groups offer movie nights, trips to local farms and orchards, and soul music dance events. LGBT-friendly assisted living in Minneapolis offers plenty of social and volunteer options in one of the country’s most tolerant, welcoming cities.

How Much Does Minneapolis Assisted Living Cost?

How Much Do Minneapolis Nursing Homes Cost?

Find assisted living in Minneapolis near you.